A young scaffolder has tragically died after suffering from a medical episode whilst working on scaffolding in Plymouth.

The worker was working on scaffolding adjacent to a five-storey building when he fell ill. Police, ambulance crews, air ambulance and the fire service were dispatched to the scene to ensure the employee was safely brought down. 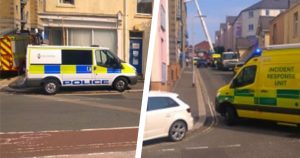 An aerial ladder was used to bring him down from the scaffolding and he was subsequently rushed to hospital via ambulance in a serious condition.

A police spokesperson later sadly confirmed that he had been pronounced dead upon reaching the hospital. The spokesperson went on to say that his death was not believed to be suspicious.

The scaffolding company on site released a statement confirming that the young worker had not been involved in an accident, but had experienced a medical emergency.