A bus was left trapped and a busy road was closed in mid-August, as scaffolding toppled onto the roof of the vehicle, following a collision with the scaffolding structure. 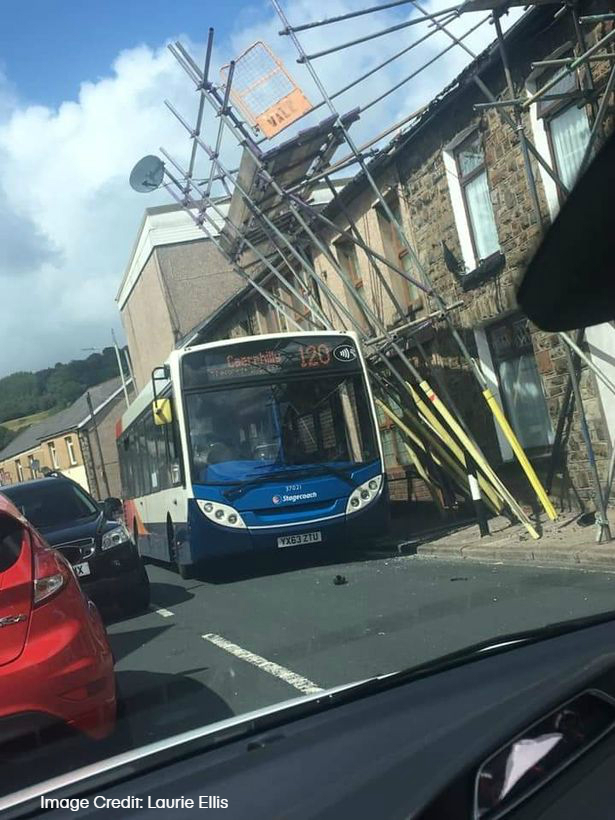 The incident occurred on Gelli Road in Ton Gelli, Pentre, South Wales on Saturday 17th August, and saw the busy road closed in both directions. With passengers still on board the bus, emergency services rushed to the scene to ensure that the structure remained safe whilst they awaited the arrival of the scaffolding company, to bring the structure down safely.

Whilst no injuries were reported, broken glass was seen at the scene near to the bus. Eyewitnesses claim that the wingmirror of the bus had clipped the scaffold, causing the structure to fall, however this hasn’t been confirmed by any party involved as of yet.

Whilst the cause of this collapse is still in question, it can be argued that a significant possibility could be the ineffective segregation of vehicles and the scaffolding, a vital component in ensuring that the required levels of scaffolding safety are achieved.

Scaffolding erected on or near the public highway is subject to the approval of the Local Authority, and this is normally granted in the form of a ‘pavement permit’ or ‘scaffolding license’. The village of Pentre falls under the governance of Rhondda Cynon Taf County Borough Council and as such, it is they who control the permit system for scaffolding. The Council’s website very clearly specifies that “scaffolding, mobile towers or hydraulic platforms cannot be erected on the public highway without a licence from the Council”. It is unclear as to whether any such license had been sought or granted.

Find out more about segregating vehicles and scaffolds in our Toolbox Talk on scaffolds constructed on or adjacent to the public highway. SIMIAN clients requiring further information are free to contact us.